Choosing the right bathroom tap sets for the decoration and design of your house is an integral part of any remodeling.

Your home remodeling will not be complete without placing the correct taps at the proper places such as bath, mixer, basin, and bathroom taps.

Before you go to purchase taps, make sure that you choose the same design or style that will go with your bathroom if you are not a professional with colors.

Taps are an epitome for bidets, kitchens, bathrooms, basins, baths, and showers.

Bathroom tap sets can be installed perfectly to fit your bathroom engagements and ideas.

You can spice the appearance of your bathroom by utilizing different kinds of taps around your home. You can also blend different brand products superbly if you are good with designs.

Spice your bathroom and home with beautiful bathroom accessories and products, these products are easily available, and they have a long lifespan.

You can also find them at a greatly reduced price. Remodel your house using the best of bathroom taps.

Look for design tips if you will be remodeling your house yourself.

Bathroom faucets are an important household commodity so make sure that you have them installed in the correct places.

Bathroom taps with shower not only help in providing your bathroom a perfect look, but they also determine the flow of water.

If you need bathroom taps with shower, then you need to figure out the distance from the cold water storage tank’s base to the height where the handset is going to be used, not the handset when it rests on the support, or the height of the tap.

You also have to be aware that extended pipe work runs fast and use up any pressure inside a system; therefore, if your taps are far from the cold storage tank then you should reduce the calculated pressure to consider this.

After you have a good idea of the pressure of your water, then you should confirm that whatever bathroom taps with shower you are looking to purchase works at that pressure.

In order to purchase the right tap, you should think of a few factors like:

If you are searching for new shower mixer taps for your bathroom, you can easily feel weighed down by the wide option available to you.

One of the best options is the mixer tap.

Shower mixer taps may be easily referred to as any tap through which the cold and hot water come out of the one spout.

The flow of water can be regulated in several ways:

What you select is determined by your bathroom style, space which you have available for mounting the tap, and your budget.

This set comprises of bath mixer taps with shower. This set gives you dual advantages, ideal water temperature for bath and also comfortable bathing experience with the shower.

It is a really terrific choice if you have small bathroom space.

Why are mixer taps good for your bathroom?

One reason why shower mixer taps are greatly preferred in the bathroom is because of their user-friendliness, especially if you choose a lever controlled tap.

The reason being you just flick the lever up when you need water and push it down once more when you are finished, which makes it simple for people who might not have the coordination or the strength to use normal taps.

What are the advantages of bath shower mixer?

A shower mixer shower will often deliver plenty of water. A shower mixer will use the hot water supply well if you have a lot from a back boiler system, for instance.

The mixer unit is a lot smaller and can also be fixed inside the wall with only the controls noticeable, providing a clean and sleek appearance to your shower room.

Bath shower mixers with thermostatic controls may be used to make sure better safety while showering.

Thermostatic mixer showers feature a safety-cut-off that can be beneficial if either the cold or hot feed fail.

This may prevent a situation where too cold or too hot water comes out of the shower.

It can not only look unpleasant but can also result in scalding incidents if the water is too hot.

Contrary to spouts or taps, bath shower mixers spray water over the whole body, which makes it essential to make sure that the shower water isn’t too hot.

Bath shower mixer set has become more and more popular option for bathrooms due to the superb convenience that they offer. 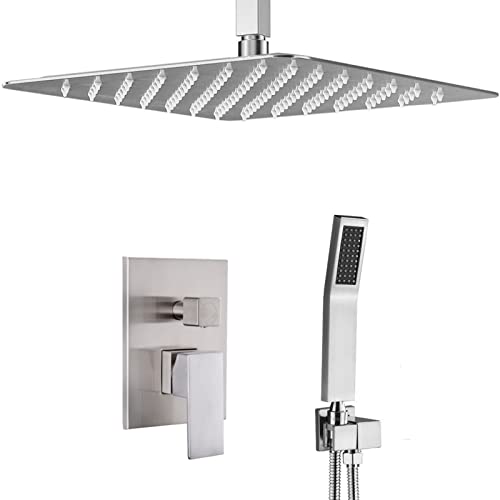 This set replaces the conventional use of two separate taps, one attached to cold water supply and the other to hot water supply.

In a mixer tap, water is still drawn from cold and hot sources; however, the water coming from these two sources is merged into one flow, and the water comes out of one spout.

Bath shower mixer set lets you set the water temperature as it flows from the tap giving you total control over setting the preferred and exact temperature.

This control over the temperature helps make running a bath quite easy.

Rather than struggling to get the correct temperature with cold and hot water from two separate taps in the traditional way, now all you need to do is determine the preferred temperature with the mixer tap and simply leave the bath to operate itself.

Bathroom sink mixer taps are fundamental necessities in our houses, particularly in bathrooms.

It had, for many years, served its purpose and is highly needed for our everyday needs.

Basically, a bathroom sink tap is a valve that is used to release water.

Apart from its obvious good looks, most taps on the market are durable and last longer.

This is undoubtedly essential because they are one of those fixtures around your home that are most frequently used.

Thus it is just essential to make them in such a manner that they are sturdy enough to withstand everyday use, and also aging, temperature changes, staining or rust.

The finishing touch to your bathroom remodeling project is the choice of your tap and has to be given the same consideration when buying other bathroom furniture.

Whether you are attempting to attain a traditional or ultra-modern look, selecting a design that is in line with your taste will be important to the rest of room; it generates both balance and harmony.

A bathroom is a good place for unwinding. We begin our day by utilizing it and end the day through using it.

Because of this very reason, before building of any structure, the first thing that comes to everybody’s mind is, the way to decorate his or her bathroom?

Which kind of accessories does the person need in order to decorate and finish the bathroom?

And the answer that comes quickly to mind is the wall mounted bath shower mixer.

When you mount taps directly into the wall, it helps get rid of unsightly pipe work from sight and can produce a sense of additional space.

There are lots of minimalists, modern and traditional; wall mounted bath shower mixer styles to go with any bathroom.

These kinds of taps will be the best answer to make your bathroom more exclusive, creative and visually appealing.

Even these guarantee you long life as well. Decide before selecting your bathroom taps and decorate your bathrooms.

Bathroom sink taps are probably the primary feature of your bathroom.

Utilized by everybody who goes into the room, if not by every guest to your house, it should be durable to ensure that it does not scratch or easily mark, and it also needs to represent your personal style.

In case you are working on a bathroom renovating project, and that project entails the modeling or installation of your bathroom vanity, then you will most likely have to install a new set of bathroom sink taps.

Different sink styles are made to suit different kinds of tap.

A modern style will most likely feature a single hole for a mixer tap, while a conventional sink might have holes for two separate taps.

Take into consideration the tap holes on any bath or sink you select, because this is going to determine what design of bathroom sink types you require.

A basin is an important commodity not only in our homes but also in our shop or even office.

A couple of years back there was only one kind of basin, and it was utilized for all purposes.

However, nowadays the scenario has changed. Because of the technological progress, basins come in various materials, shapes, sizes, as well as the purpose of use.

Thus, basins may be categorized into a variety of groups, and as a result, the bathroom basin taps that are offered in the market come in diverse designs.

No matter what basin you select, ensure you select it along with your tap or taps.

The selection of taps to select from is as broad, if not broader, compared to the selection of basins, and the two you purchase should match each other both in design and function.

Your tap and basin have to be both practical and visually appealing if you are to be satisfied with your final selection.

When designing a bathroom, worries regarding water temperature regulation are often the last thing on somebody’s mind.

Rather the majority of property owners focus on the appearance, like the type of shower taps to go for, or how the tiles would look with the sink that will match everything in the bathroom.

Many times guests or kids that need to use the shower or sink are not aware of which is the cold and hot knobs of the mixer taps they are utilizing; they might find themselves using too much hot or cold water.

So, proper care is required to prevent any possible risks to the skin from accidentally scalding the skin.

Luckily, thermostatic shower mixer taps let you set a safe water temperature, and when the temperature of water goes up above the desired level, the thermostat function will stop the supply of water instantly.

You can enjoy protected operation with the thermostatic bath taps since they have a thermostatic valve with an anti-scalding gadget.

It is easy to make sure that your shower is not too hot since it has an override button, which allows you to adjust the highest temperature setting.

You at all times deserve a shower at a temperature you want.

Regardless of what your remodeling designs are, you need to make room for important bath products such as bath shower mixer taps, shower sets, sink, bathroom tap sets and bath mixer taps.

You can also find the latest technology on the internet.

This also include top quality undersink reverse osmosis drinking water filter system like the one below.

There are tons of bathroom tap sets on the internet, and you will have the best chance of getting something that is unique.

Online shopping also provides you with a chance to do some comparison shopping to make sure you will get the best possible price.

You will also get access to consumer reviews that will help you to make the best selection.

Spice your bathroom and house using beautiful bathroom accessories and products, these products are easy to access and they last longer.

HarneyMFG is a participant in the Amazon Services LLC Associates Program, an affiliate advertising program designed to provide a means for sites to earn advertising fees by advertising and linking to Amazon.com